The UC Botanical Garden will host an exhibition of work by Berkeley art legend David Lance Goines in the Garden's historic Julia Morgan Hall from April 13 to 24. Featured in the exhibition is a new poster of the Garden's Japanese Pool, with a limited number of posters available for sale onsite.

With work exhibited around the world from the Museum of Modern Art to the Smithsonian, Goines has long-standing ties to Bay Area treasure Chez Panisse and Alice Waters. The focus of Goines' new poster features the Japanese Pool, an iconic spot in the UC Botanical Garden with an interesting backstory. When the 1939 Golden Gate International Exposition on Treasure Island closed in 1940, its Japanese exhibit was donated to the Garden on behalf of the Japanese government, with the aid of a donation from the UC Japanese Alumni Association.

The exhibit was crafted of Japanese stone, including lanterns and a bridge displayed as a Japanese garden and pool. Kaneji Domoto, a prominent landscape architect in the Bay Area, assisted in designing the Japanese gardens at the Exposition. He also designed the reinterpretation of the display and supervised Japanese workmen as they placed about 150 boulders to create the waterfalls and pool in the Garden in Berkeley. The work was completed in about November 1941.

The pool was damaged in during an epic El Nino storm in 1962 when it rained 38 centimeters (15 in) in just three days. Boulders and lanterns were swept away by Berkeley's usually tumbling but now raging Strawberry Creek. Many of the original boulders were recovered along with most of one original Yukimi-gataIn lantern, the focal point of the new Goines work. 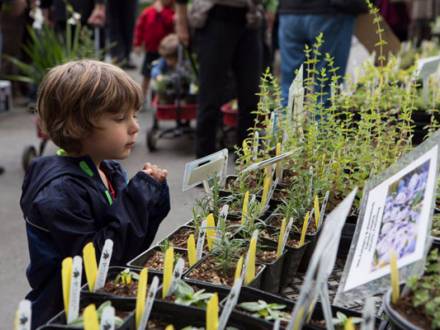