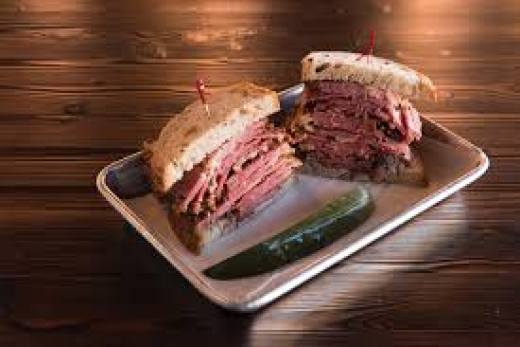 Augie’s Montéal Deli is open for take-out and curbside orders! As we recently were featured on KQED, we are still open for take-out, and expanding our offerings to include other essentials as we become Augie’s Montréal Deli & Market to better serve the community.

You can order Augie’s Montréal-style Smoke Meat brisket and poutine, Smoke Meat tomato sauce with a quart of dry pasta shells, Smoke Meat mac-and-cheese, Matzo ball soup, frozen so that people can save it for later, our one-of-a-kind Uncle Nick’s Pastrami Brisket Dog, as well as other items like toilet paper, paper towels and spray cleaner. We’re also selling eggs and some produce by the pound.

Montréal smoke (or smoked) meat is a cured beef brisket with the spice of pastrami and the crumbly texture of corned beef. We naturally cure each brisket, hand rub with our traditional spice blend, then smoke them with hard woods and bake for 8 hours. We serve authentic poutine using St Hubert poutine sauce imported from Canada, and real deal squeaky cheese curds from Oakdale California. It’s the way that the good people of La Belle Province (a.k.a. Quebec) intended poutine to be.