Since opening on a corner in the Mission District of San Francisco in 2002, Tartine has inspired a loyal following and earned rave reviews for its delectable pastries and legendary bread. Chad Robertson and Elisabeth Prueitt, the husband and wife team who co-founded Tartine Bakery, have received many accolades and awards, notably winning the James Beard Foundation Award for Outstanding Pastry Chef of the Year in 2008.  In 2015 COO Chris Jordan joined the team bringing with him a lifetime of experience in the coffee world and together they created Coffee Manufactory, which has gone on to win awards and set the standard for sustainability and intentional sourcing. Tartine Berkeley is a casual café and bakery located in the historic Graduate Berkeley hotel. Service is from 7:00am – 4:00pm daily. Breakfast will feature Coffee Manufactory coffees and Tartine’s sought after Viennoiserie including the iconic morning bun and freshly baked croissants. The lunch menu offers sandwiches and salads, and the pastry case highlights Tartine classics such as eclairs, tarts, cookies, muffins and tea cakes. 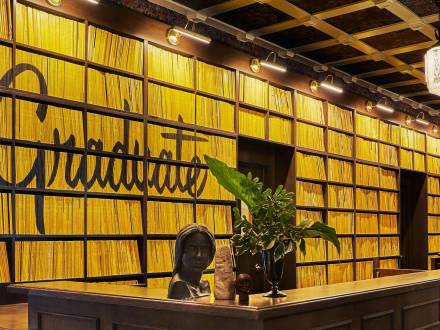 The Graduate Berkeley - Travel with Purpose