Since long before STEM learning (science, technology, engineering and math) rocketed into the public consciousness, the Lawrence Hall of Science has been a favorite destination for Berkeley locals and visiting families.

The Lawrence Hall of Science was an idea before its time. Since long before STEM learning (science, technology, engineering and math) rocketed into the public consciousness, the Lawrence Hall of Science has been a favorite destination for Berkeley locals and visiting families. The Hall’s hands-on exhibits and classes are a tactile introduction to the wonders of science and technology.

Established in 1968 in honor of the famous Nobel Prize-winning physicist and Berkeley resident Ernest Lawrence, the Lawrence Hall of Science’s hulking concrete structure is an unmissable landmark of the Berkeley Hills. The building’s bunker-like exterior hides within its walls a spellbinding educational experience that brings the technical workings of the world to life.

The family fun starts from the courtyard outside the main entrance, where an unusual play structure, a massive strand of DNA, sits with its double helix shape acting as a sort of obstacle course. Across the courtyard, the climbable “Pheena the Fin Whale” sculpture is an example of the living masterpieces that DNA shapes. Hop on Pheena’s back and passersby might confuse you with Aquaman.

A multitude of permanent and rotating exhibits inside the spacious halls cover a wide range of scientific and technical fields. “Science on a Sphere,” a remarkable 360 degree projection system, displays accurate weather and climate data on a large suspended globe. Exhibits like “Design Quest” and the “Ingenuity Lab” challenge young engineers to think creatively to solve unique problems.

For those families looking to get a little bit more out of their visit, the Lawrence Hall of Science offers workshops, classes and camps that go in-depth on certain subjects.

For parents, the Lawrence Hall of Science is not just a convenient activity to keep the kids happy. Who doesn’t enjoy a planetarium? The Hall’s 3D Theater screens daily films as well, many featuring stunning nature photography (David Attenborough voice-overs not guaranteed).

It’s more than that, however. For many parents, the thrill of discovery in their children’s faces makes the trip to the Lawrence Hall of Science on of the most fun things to do in Berkeley.

If the Hall’s thrilling hands-on exhibits and STEM learning opportunities aren’t enough to draw you into the hills, then the panoramic views from its expansive deck should be. These are some of the most awe-inspiring sights in the entire Bay Area, a sweeping westward view of San Francisco and its famous bridges. Taking in the sunset from this vantage is not something you or your family will soon forget. 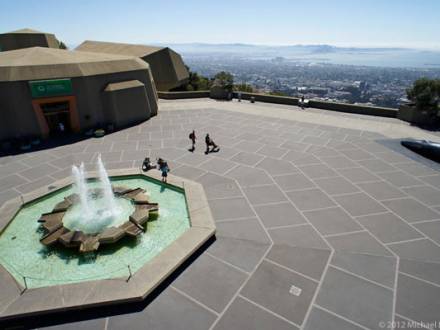 The Lawrence Hall of Science