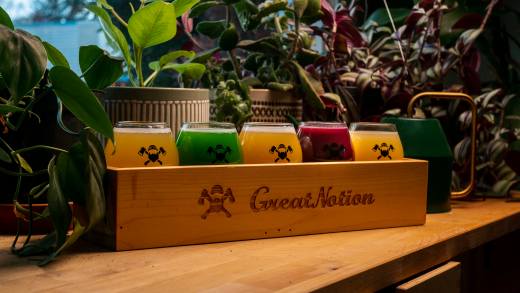 Website Save
Great Notion is a brewery started by three friends and neighbors in Portland, Oregon. We offer hazy, fruit-forward IPAs and culinary-inspired sours & stouts while striving to always keep beer fun.


GNB has won numerous Gold and Silver medals over the years, including accolades at World Beer Cup, GABF, Best of Craft Beer Awards, and Oregon Beer Awards, as well as the 2018 #1 IPA in America from Paste Magazine.


GN has six locations in the Pacific Northwest: Great Notion Alberta , Great Notion NW, Great Notion Beaverton, and Great Notion Division in Portland and Great Notion Ballard and Great Notion Georgetown in Seattle. We also have a location in Sacramento CA for e-commerce fulfillment. We sell our beer direct to beer drinkers from our own taprooms in draft and cans to-go, as well as through our app and website. Shipping is also available in the 14 states, including Oregon, Washington, Kentucky, Virginia, Washington DC, New Hampshire, Vermont, North Dakota, Pennsylvania, Nebraska, and Ohio, as well as to Anchorage, Alaska. As of 2022 you can also find select Great Notion brands in the coolest bars, restaurants, bottle shops and specialty grocers up and down the western seaboard.


The Great Notion was founded by James Dugan, Andy Miller, and Paul Reiter, with brewpubs being led by COO Ryan O’Connor.