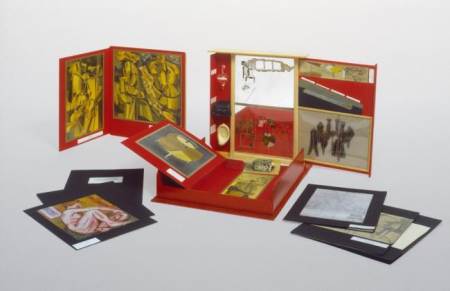 Fluxus Reverb: Events, Scores, Boxes & More offers viewers an opportunity to see Fluxus materials and many artworks in the form of a box, including numerous Fluxkits by a wide variety of artists. Often interactive, Fluxkits were produced in multiples, with paper labels designed by Fluxus founder George Maciunas, and distributed at very little cost. These mini museums, as they are sometimes called, are an example of how Fluxus artists rejected traditional modes of production and display. Such works owe a debt to Duchamp’s Boîte en valise, originally produced by the artist between 1935 and 1941, when he left Paris for New York ahead of World War II. The boîte (box) contains miniature versions of the artist’s work; Series F (1966) of the Boîte works is on view. Also in the gallery is Fluxus artist Yoko Ono’s Untitled (Everson Catalog Box). The box, which accompanied her 1971 exhibition This Is Not Here, contains multiples by Ono, including parts of paintings made with John Lennon, such as Painting Stepped on by Yoko & John and Painting Slept on by John & Yoko.