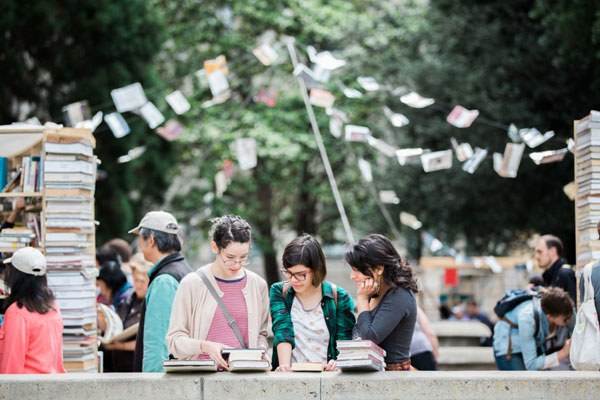 The Bay Area Book festival announced its ambitious lineup for its fifth-anniversary event, set to take place May 4th and 5th in Berkeley, CA.

Berkeley, CA, March 15, 2019 – The Bay Area Book Festival—one of the world’s premier celebrations of writers, readers, and the written word—has announced its full complement of presenters, programs, and activities. Nearly 500 speakers and exhibitors from across a spectrum of genres and topics will come together with tens of thousands of book enthusiasts for the fifth anniversary Bay Area Book Festival, May 4 and 5 in downtown Berkeley, CA. The Festival celebrates two days of interviews, panels, keynotes, performances, participatory activities, exhibits, and a lively Outdoor Fair.

The program will satisfy fans across many interests, including literary fiction, non-fiction, speculative fiction, mysteries, memoir, poetry, food writing, children’s books, and more, with special emphases on women, Native writers, youth literature, and issues including race, incarceration, immigration, and the environment—all within an overall theme of the power of literature to create a better world. Literary sessions take place in a dozen venues throughout the downtown area and on outdoor stages.

Outdoor venues, including the San Francisco Chronicle Stage, are free. Guaranteed seating in indoor programs can be accessed through Priority Tickets at $10/session. A General Admission Wristband allows space-available access to all indoor sessions all weekend for only $15. Easy advance purchase at www.baybookfest.org. Youth under 18 attend for free. A Friends program, at www.baybookfest.org/contribute-2/, allows attendees to receive wristbands and Priority Tickets while supporting the nonprofit festival.

About the 2019 Festival; Headliners

Since it burst onto the scene in 2015, the Festival has been widely recognized for the quality of its authors, its international scope, and its commitment to social justice. “This year more than ever, the festival presents a diverse array of authors, many of whom are exploring some of today’s most urgent, complex issues,” says Festival founder and executive director Cherilyn Parsons. “The festival is smart fun, the kind of pleasure that comes from intellectual adventure, collective laughter, and the joy of sharing in ideas and imagination. Magic happens when people come together around books.”

Additional headliners appear in the festival’s new Writer to Writer series featuring two writers who are fans of each other’s work; the series, spawned from the mind of Zoetic Press’s Lise Quintana, will be podcast. Authors include novelists Esi Edugyan (“Washington Black”) with Tayari Jones (“An American Marriage”); Joyce Carol Oates ("Hazards of Time Travel") with André Alexis (“Days of Moonlight”); legendary Ishmael Reed with young poet Morgan Parker (“Magical Negro”); Carmen Maria Machado (“Her Body and Other Parties”) with Lacy Johnson (“The Reckonings”); and Linn Ullmann (“Unquiet”) with her editor and fellow novelist Geir Gulliksen (“Story of a Marriage”).

Other special sessions include a tribute to Lawrence Ferlinghetti on his 100th birthday; a celebration of The Paris Review; a screening of The Worlds of Ursula K. Le Guin, followed by a discussion with the filmmaker and Le Guin colleagues; “The Browns of California” with Miriam Pawel and Brown family members Kathleen Brown and Joseph Kelly; the Berkeley Symphony Orchestra performing original compositions inspired by the work of Bay Area poets; and two Literary Death Matches, the first ever for young adults and for middle-graders.