Close your eyes, place a finger on the Berkeley map, chances are there’s a craft beer on the block.

Berkeley is more than Bear Territory (Go Cal Bears!). It's also Beer Territory, with some of the West Coast's top craft brewers well-schooled in the ancient alchemy that turns water to beer.

When Triple Rock opened in 1986, there were only four other brewpubs in America. It is the only one still independently owned by its founders and using its original brewing equipment. That equipment is putting out some of the best ales on the West Coast, complemented by a kitchen dishing some of the finest fare in town. Many travel great distance to quaff Triple Rock's hoppy IPAX and mischievous Monkey Head.

Just down the street in the heart of downtown Berkeley, Jupiter benefits from the same ownership as Triple Rock and offers one of the finest heated outdoor beer gardens this side of Berlin. Don't sleep on Jupiter's brick oven pizzas which go quite well with over 25 beers on tap.

The west side has a fast-growing urban wine scene, making perfect sense that some amazing beer is also being brewed there. (You have heard the old saying, "it takes a lot of beer to make great wine," right?) Gilman Brewing takes the Belgian bus with a rotating menu of sours, IPAs and saisons. The chill warehouse setting and friendly staff make guests feel right at home. The Rare Barrel is full sour jacket with award-winners spilling out of the taps (and tasty snacks pumping out through the kitchen door).

For a free speech taproom, it's Berkeley Freehouse. Giant archival black & white photos of Mario Savio and civil rights legends grace the walls of this historic building where craft beer fuels good conversation and spirited debate. Indoor and outdoor seating make it a versatile choice no matter the season.

Brewed in Berkeley, Trumer Pils produces a crisp pilsner with hop-forward aroma that has earned a wide and devoted following. The brewer credits Berkeley's California Sierra snowpack water as a key ingredient! 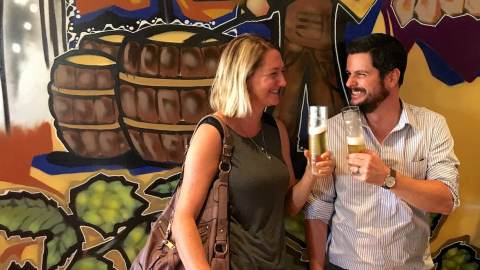 Learn more about craft breweries and beer bars in Berkeley.